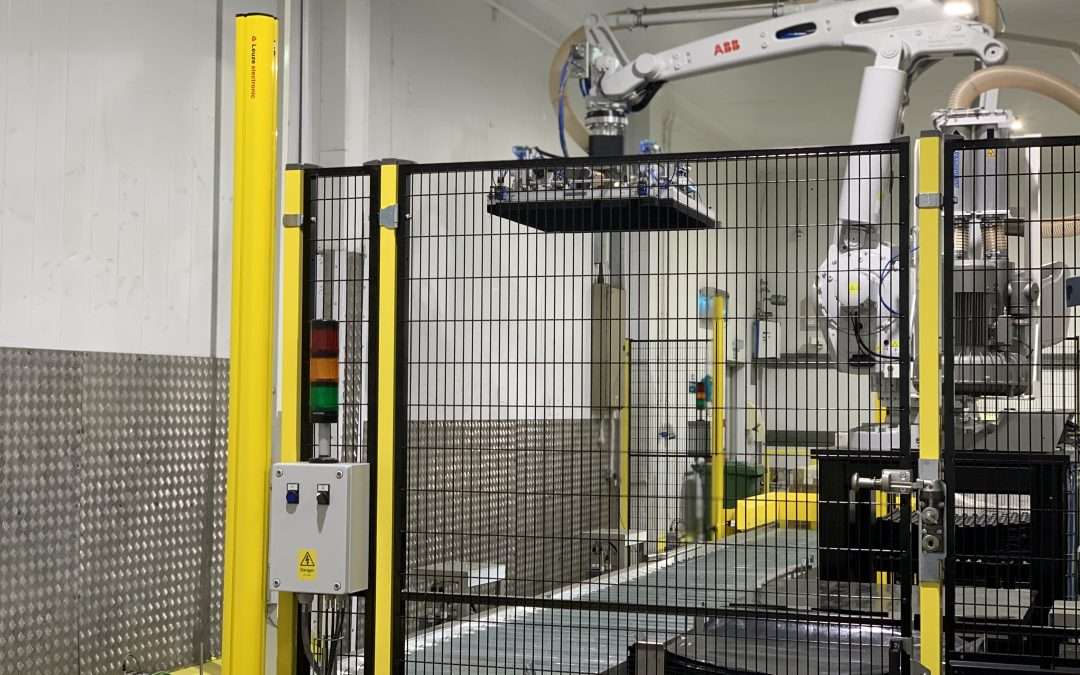 CKF Systems were recently commissioned to automate a process within the Rick Bestwick Chesterfield facility to reduce the manual handling requirements of their blast freezing process, increasing safety and also streamlining their processes.

Rick Bestwick, a leader in the temperature-controlled storage industry, receives palletised cases from customers in a chilled condition which require blast freezing for storage. To allow efficient blast freezing there has to be a suitable airflow through the entirety of the pallet, but on receipt the cases are palletised one on top of the other allowing no airflow between the layers. Operators were previously required to manually remove cases from the inbound pallets and place them onto a new pallet, inserting freezer spacers between each layer. This was an extremely time consuming, manual task, with cases frequently reaching weights of up to 25kg and the layer cards being large and unwieldy.

Using an ABB IRB 660 robot and a series of vision systems, CKF developed a cutting-edge system that automatically detects the position of cases on the pallet in both the vertical and horizontal planes. A system was also developed to identify the position of the layer cards on a pallet or within the storage to accurately and repeatedly position the robot suitably. Using a single tool, the robot picks and places full and part layers of cases, slip sheets, egg shell freezer spacers, UK STD pallets and Euro pallets.  Robbie Dawson, Sales and Marketing Manager at CKF said “This is the first time that a project of this nature has ever been installed in the UK, highlighting the extensive technical expertise we have at CKF and why we are the first choice for our customers looking for innovative solutions.”

The system initially receives a pallet, stripped of all pallet wrapping into the system. It then automatically detects the height of the pallet, position of cases and whether it is a full layer on the top of the pallet or part layer. The robot places an empty pallet in the palletising position, followed by a slip sheet directly onto the pallet. The robot then picks the complete layer from the pallet and places it onto the pallet, ensuring position and skew of the layer is corrected (in the case of a part layer, the robot will place these cases to one side temporarily). Once the cases are placed onto the pallet, a freezer spacer is placed onto the cases and the operation repeated until the donor pallet has been fully moved across with freezer spacers between each layer. Any part layers will then be placed onto the top of the new pallet.

After the pallet has be through the blast freezer, the pallet is then de-palletised and re-palletised so that the freezer cards are removed from pallet and the product is then placed on a wooden pallet and a slip sheet for storage and shipment. This process is completed by the system in the same way as the freezer cards being added to the pallet. The system has been successfully in operation for over six months, Ryan Astle at Rick Bestwick commented “We were delighted with the palletising system that CKF Systems installed for us. Automating this part of our plant has simplified our processes and also increased safety for our workforce. This is the first step on our automation journey and we were really impressed with the training and support our team received from CKF which ensured that the whole implementation process ran really smoothly”. Not only does the new system streamline Rick Bestwick’s operations but the speed of the system saves their customers money by increasing the shelf life of their products. By minimising human intervention the system also reduces the risk of damaged goods whilst at the same time drastically reducing the likelihood of contamination.

To find out more about the team and CKF and their solutions visit their website www.ckf.co.uk

This website uses cookies to improve your experience while you navigate through the website. Out of these cookies, the cookies that are categorized as necessary are stored on your browser as they are essential for the working of basic functionalities of the website. We also use third-party cookies that help us analyze and understand how you use this website. These cookies will be stored in your browser only with your consent. You also have the option to opt-out of these cookies. But opting out of some of these cookies may have an effect on your browsing experience.
Necessary Always Enabled
Necessary cookies are absolutely essential for the website to function properly. This category only includes cookies that ensures basic functionalities and security features of the website. These cookies do not store any personal information.
Non-necessary
Any cookies that may not be particularly necessary for the website to function and is used specifically to collect user personal data via analytics, ads, other embedded contents are termed as non-necessary cookies. It is mandatory to procure user consent prior to running these cookies on your website.
SAVE & ACCEPT